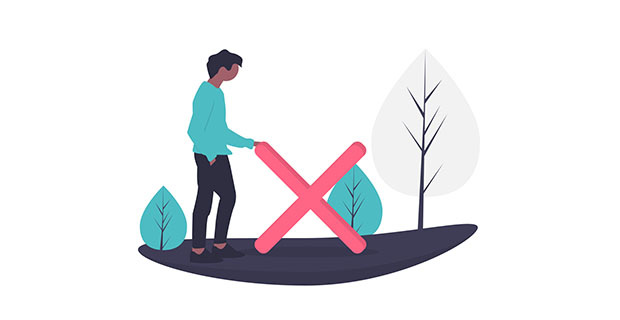 The issue of co-pay card fraud has been in the news for some time, but with the increased prevalence of high-priced specialty products, the cost of missing this fraud – literally – has become too high for manufacturers to rely only on traditional techniques, such as human investigators. This isn’t to say that there’s no role for people in stopping co-pay program fraud – they’re absolutely crucial!  They just can’t be the only tool used to combat fraud, as human intervention only is simply too costly and inefficient in the face of today’s fraudulent pharmacy.

So if we can’t rely solely on trained investigators to ferret out fraud, what should we do? The answer is that we need to employ sophisticated analytics to alert us to potential indicators of fraud early on.

Broadly speaking, analytic models work well in fraud detection because they’re adept at identifying patterns in data and at detecting outliers—or values that don’t seem to make sense. At TrialCard, our analytics team has built a tool called “Rx SpotlightTM,” which identifies unusual activities among co-pay program transactions that could be indicative of fraud.

The goal for any detection system is to be perfect—and therefore to identify all cases that are “truly positive” (i.e., fraudulent) and to ignore cases that are “truly negative” (i.e., not fraudulent). Unfortunately, data—as in life—rarely presents us with perfectly clear evidence. Instead, we have to rely on methods of estimating and predicting fraud and work to continuously refine those methods to make them as accurate as possible.

All of which brings me back to my grad school days—which is unfortunate—and one particularly gnarly topic, called Bayes Theorem. While the calculations were mind-bending, the key concept behind this was pretty simple:  How do you know whether something you think is true is really true?

You can visualize this in a table like you see below: 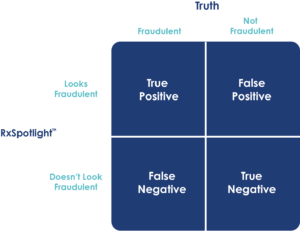 Let’s use a real example:

“Say a pharmacy has been averaging 500 fills per month for a particular medication for 12 months. But in the next month, it averaged 1,000 fills. Do we think this pharmacy is engaged in fraud?”

We simply can’t tell from the data alone whether this is fraudulent activity or not—but our Rx SpotlightTM tool can certainly flag this pharmacy as having some strange activity.

In the end though, effective fraud monitoring is the essence of a collective effort—using the best of what analytics and human beings can bring to bear in order to provide the best possible means to separate legitimate activity from fraud.

This website uses cookies to improve your experience while you navigate through the website. Out of these, the cookies that are categorized as necessary are stored on your browser as they are essential for the working of basic functionalities of the website. We also use third-party cookies that help us analyze and understand how you use this website. These cookies will be stored in your browser only with your consent. You also have the option to opt-out of these cookies. But opting out of some of these cookies may affect your browsing experience.
Necessary Always Enabled
Necessary cookies are absolutely essential for the website to function properly. These cookies ensure basic functionalities and security features of the website, anonymously.
Functional
Functional cookies help to perform certain functionalities like sharing the content of the website on social media platforms, collect feedbacks, and other third-party features.
Performance
Performance cookies are used to understand and analyze the key performance indexes of the website which helps in delivering a better user experience for the visitors.
Analytics
Analytical cookies are used to understand how visitors interact with the website. These cookies help provide information on metrics the number of visitors, bounce rate, traffic source, etc.
Advertisement
Advertisement cookies are used to provide visitors with relevant ads and marketing campaigns. These cookies track visitors across websites and collect information to provide customized ads.
Others
Other uncategorized cookies are those that are being analyzed and have not been classified into a category as yet.
SAVE & ACCEPT
Powered by